Patrick Kingsley in Maiduguri and Sarah Boseley reporting for The Guardian spoke to ORLA FAGAN about the escalating Nigerian Crisis and the crippling affects of the Boko Haram insurgency. 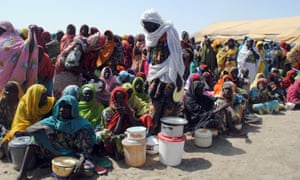 More than 120,000 people, most of them children, are at risk of starving to death next year in areas of Nigeria affected by the Boko Haram insurgency, the United Nations is warning.

Intense fighting in parts of Nigeria, Chad, Niger and Cameroon has left more than 2 million people displaced, farmers unable to harvest their crops and aid groups unable to reach isolated communities. One small state in Nigeria has more displaced people than the entire refugee influx that arrived in Europe last year.

A Guardian correspondent saw dozens of skeletal babies at a makeshift camp in the regional centre Maiduguri. Many had plastic nodules stuck to their skull, to allow the nurses to attach them to a drip. Many children are so thin their scalp is the only place where a visible vein can be found.

And yet despite these appalling scenes, Maiduguri is among the best served places in a region the size of Belgium. Much of the area is still insecure because of the war with Boko Haram, and countless thousands have not made it to population centres where some degree of care is available.

Orla Fagan, a Nigeria-based spokesperson for UN’s Office for the Coordination of Humanitarian Affairs (UNOCHA), said: “You’re looking at over 120,000 deaths next year if you can’t get aid to them – and they’re mostly children. If we can’t reach people with food and nutritional assistance there will be deaths.”

Kevin Watkins, chief executive of Save the Children, said following a recent trip that the entire region was “teetering on the brink”.

He said unless emergency measures were taken, 200 children would die every day over the next year. A crucial meeting is planned for Abuja next Friday (2 December) at which aid agencies will try to agree a plan of action.

“And yet despite this background, this is a completely hidden emergency,” Watkins said. “The international community hasn’t responded on any scale at all.” 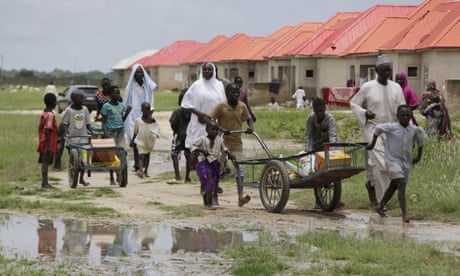 Boko Haram, a jihadi group, has lost ground in the past year but its insurgency has left large areas of farmland inaccessible and many roads unnavigable by aid convoys. The situation has been compounded by a lack of international support: UN funding for the Nigerian crisis is 61% or $297m short of its target.

Kashim Shettima, the governor of Borno, the Nigerian state that has borne the brunt of the insurgency, said the farming that usually sustains locals had collapsed. “Most of our communities have not been able to till their soils for the past four years,” Shettima told the Guardian. “It’s just unimaginable; 80% of the people [in Borno] were denied access to their farms by Boko Haram.”

As a result, at least 55,000 people in north-east Nigeria are in a famine-like condition, Fagan says. According to UN classifications, these people are at the fifth and worst stage of food insecurity.

A further 1.8 million people are at the fourth phase, which is defined as a crisis, while 6.1 million are at the third phase, which constitutes an emergency. UNOCHA expects both figures to rise to 2 million and 8.3 million respectively within the next year.

“It’s the biggest crisis on the continent and it’s being ignored,” said Fagan. “What’s happening in Aleppo is horrendous, but it’s equally bad in north-east Nigeria – it’s just a different context.”

Widespread unemployment among displaced people has led to starvation even in places with access to aid.

In Maiduguri, which has been overwhelmed by more than 600,000 displaced people, the Guardian visited malnutrition clinics run by Médecins Sans Frontières. Most patients were the children of unemployed displaced people who had been unable to provide them with enough food.

At a nearby camp for 3,000 displaced people, its leader, Bulama Modusalim, said he had lost count of the number of residents who had died of starvation. “Hunger is killing us,” he said, holding up a dangerously thin toddler. “People are dying of hunger every day.”

The child’s mother, Hauwa Nana, 35, said one of her five children had starved to death since they fled to Maiduguri and she feared her toddler would be next. “I can only feed them once a day,” she said.

In Monguno, an isolated town accessible to journalists only by helicopter, aid groups said the situation was just as dire.

“The people here totally depend on aid,” said Mathieu Kinde, project manager for Alima, the first non-governmental organisation to reach the town after it was freed from Boko Haram control. “The host community can’t farm their land because if they go, they sometimes get killed.”

Officials and aid workers warn that if the situation continues it could foment extremism in the area and migration flows farther afield. “A hungry young man is easily susceptible to the manias of religious demagogues like [Boko Haram founder] Mohammed Yusuf and [leader of the insurgents] Abubakar Shekau,” said Shettima.

The insurgency has created huge migration flows within Nigeria and Toby Lanzer, the UN assistant secretary general and regional humanitarian coordinator for the Sahel, warned that many of displaced people may eventually try to reach Europe.

“You’ve been totally focused on people arriving [in Europe] because of problems in Syria and Afghanistan,” he said. “But over the course of the next five years, I can predict – and I’d be willing to bet a month’s salary – that the proportion of people who will arrive in Europe from Nigeria, Chad, Cameroon and via Niger will grow substantially.”