I’ve finished week four now of my glorious return to Kabul and between two minds about being back.  I had an extension on my contract for three months and to be honest I don’t think I’d fancy a longer extension since it’s either dust or pollution that ensures I need boxes of tissues everywhere I go because my sinus’ suffer so much.

We’ve been lucky with the weather and the real heat hasn’t started, so far.  Spring is well and truly established though.  I’ve never seen anything as fast as the onset of Spring in Kabul.  It was like watching one of those fast-forward films of a flower that’s budding – one day there’s snow and the next Spring is in full flight.  I spotted roses in bloom at the beginning of April and our garden at work and the garden in the guest house (UNICA) are looking stupendous.

It always amazes me that the Afghans, despite the war and violence they endure are so interested in nice gardens and put so much work into having pretty flowers around.

I retained Room No. 6 in UNICA, which makes me very happy.  Okay, so there’s cigarette burns in the carpet, it’s badly in need of a lick of paint and the shower curtain has more holes than curtain; but it has a desk at the window that overlooks the main garden and a very comfortable wicker chair; so when I sit to work, I can see all that comes and goes.

This guesthouse has been used by the UN for almost fifty five years and the owner has recently sold it for $5 or 6 million for an office block to be built on the land.  Property prices in Kabul are as expensive as Dublin was at the height of the boom.   It will be officially handed back to the owner on July 31st but as the UN own the furniture they will close it down on May 31st to do an inventory and sell off the assets.  UNICA has been written about in many books and the only place in Afghanistan that has consistently sold booze for more than 50 years and was also the only place in Afghanistan to boast of satellite TV throughout the reign of the Taliban.

UNICA is slowly emptying out as people move out of the compound.  I could very well end up being the last woman standing at one of the oldest international institutions in Kabul before the auditors and bulldozers move in.  When I arrived last September, the garden was in full bloom, the evenings warm and a bunch of us spent many hours sitting around eating, drinking and enjoying the wonderful oasis in the middle of a busy city.  Other than Kelly (who is from Texas and NOT the United States as she keeps reminding us), all the pals have gone and I must admit there are days when I question my decision to stay until the bitter end.

UNICA has seventy rooms and its impending closure has put pressure on space for international staff working with the UN.  There are MOSS (minimum operating security standards) regulations that buildings must meet, e.g. a building has to be a minimum of 30 metres behind the boundary wall and the boundary wall has to be a certain height.  This is to stop insurgents trying to lob grenades over the wall as they cycle past or drive their white Toyota Corolla cars through the barriers before blowing themselves up.    There are many reasonable guest houses around Kabul that comply with MOSS regulations but the department of safety and security (DSS) are playing games and trying to force as many UN organizations on to the huge compound (UNOCA) on the Jalalabad Road, the most bombed road in the country.  As most of the UN offices are in town, this requires travel to and from work every day down the Jalalabad Road.   Now it’s fine travelling down the Jalalabad Road if you are going to buy a couple of bottles of red wine from UNOCA but we’re having a REAL emergency now as UNOCA hasn’t had a drop of red wine since I came back from my leave.

I recently had a phone call to say that the red wine was back in stock and by the time I had organized a driver and we headed off in the armoured vehicle down the Jalalabad Road to arrive at UNOCA – they were out of stock again.  I bought a couple of the remaining bottles of white wine that would be best used for cooking!

The white wine did however come in useful when I was travelling to Jalalabad last weekend for work. They have Provincial Reconstruction Teams (PRTs) all over the country and these are run by the international military, who ‘assist’ the Government of Afghanistan to rebuild the country.  They are mostly very conveniently located to suit the needs of the foreign military, for instance the Americans have placed their PRTs strategically along borders of potentially unstable countries.  That means when it comes to aid and the distribution of resources, they are allocated geographically rather than where it is needed.  This is not only a waste of valuable resources but also denies those who are most vulnerable of badly needed assistance.

If the war was over, then the PRTs would be useful and viable, but with intensified fighting in many areas their sole existence is to win the ‘hearts and minds’ of Afghans as any reconstruction is pretty useless until there is peace.  One of the big downsides of this though is the perception of men in military uniforms handing out school books or building clinics.  This only serves to confuse the role of the humanitarian worker and the military in the minds of the insurgents and for the humanitarian workers in the provinces, this is proving to be dangerous and at times lethal.  My job was to make a presentation to the US PRT in Jalalabad on the need for neutral aid being delivered and the use of military as a last resort.  Not exactly within my scope of expertise but I couldn’t resist the opportunity to get out of Kabul and see something else of the country. 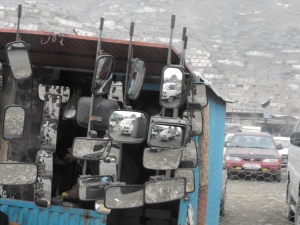 Jalalabad is just 120 kms from Kabul but the road is dangerous and there is a flight for UN staff.  Kenny Rogers from Sierra Leone is the regional head of office there and when I asked him would he like some ‘cold water’ brought down to him (a euphemism for booze), he was delighted with my offer.  I wrapped one of the white wine bottles in a towel and threw it into the suitcase and put another into my computer bag.  Kenny lives in a small guesthouse with six others, so a lot smaller than anything in Kabul.  I was assured as I wasn’t taking a commercial flight that the cold water wouldn’t be a problem.

However, the security guard on the UN flight had a different idea and pointed out the directive from President Karzai saying that no alcohol was to be transported.  The security guard had spotted the bottle in my suitcase, but not my computer bag.  I offered to pour out the wine but they almost had a heart attack and the chief of security came along and waved me through with my two bottles of precious cold water.  It is a well known ‘secret’ that if you bring in two bottles of duty free, the customs officers will take one for themselves and leave you with the other – so much for the Islamic Republic of Afghanistan.

Other than work, there ain’t a lot to do in Jalalabad.  I went from the airport to the office and the office to the guesthouse, to the office, to the military base.  No TV in the room, no computer connection… nada, zilch, naught…. and nada to do while there, except work.  The lads were lovely and the only entertainment was a karaoke machine one of the guys from Ghana had in his room.  Kenny Rogers fancied himself as a singer…. but in the mode of Lionel Ritchie and going down to the kitchen for a drink of water at 2 a.m. in the morning and hearing Kenny trying to belt out some Lionel Ritchie love songs, was indeed some experience.  Okay, so he was in the privacy of his own room but he had no problems the following night when we all gathered to have a go at the karaoke and he screeched out the same song time and time again.  You’d need a lot of cold water to appreciate this version of Kenny Rogers!

Jalalabad itself is a lot greener and a lot hotter than Kabul.  You go down into a deep valley and the countryside is well irrigated from the many rivers that flow into the valley.  They supply a lot of the produce that’s available in Kabul and being on the border, it’s very much culturally influenced by Pakistan with highly decorated tuk-tuks as the favourite mode of public transport.  As 3-wheeler motorcycles with coverings on the back, they squeeze in about five or six people so not an ideal mode of transportation if you require safety.  It’s also a lot more conservative than Kabul, but then again everywhere outside Kabul is a lot more conservative.  There were hoards of young boys going to school on the morning I was leaving, but I didn’t spot one girl with a white head scarf (usually worn going to school) – I actually didn’t see one girl out that morning.  In Kabul maybe 10 percent of the people on the streets are women, in Jalalabad it must be less than 2 percent and you can only imagine that the women are locked up in their homes.

Travelling back on the UN flight and there is no terminal in the military base, so a guy arrives in an open truck and places his brief case in the back.  He has a stock of tags and labels the bags, checks your ID and tells you he doesn’t trust you enough to leave you with your hand baggage, so he takes it from you until you board.  He weights the bags by picking them up with both hands, shrugging his shoulders and then guessing the weight for the manifest.  He is also the baggage handler and his assistant gives him a leg up to climb into the luggage hold on the plane as you hand him up your baggage.  It all seemed so normal at the time.

Winter is great for covering up and wearing a scarf when out in public is not a hardship.  However, with the onset of the good weather it’s very annoying to see men going around in short sleeve shirts, while as a woman I’m expected to wear long sleeve garments, that also cover my ass and then a scarf in the scorching heat, for fear of exciting a man!  Tawab is a young tailor who has a small shop beside Kabul Café and he’s very innovative and great at copying clothes.  I called down to have some tops copied for the summer and he was sitting with a copy book practicing writing English script and words.  His brother is importing carpets into Dubai and they’re setting up a website so he wants to be able to read and write English and access the potential customers who speak English.  Tawab is quite shy and he speaks English reasonably well, asking the difference between the pronunciation of colour and collar. It’s one of the things that really impresses me about Afghans, their desire and willingness to learn.

I’m planning my R&R break in India to see the Taj – I think I’ve wanted to see that since I was about 10…. Hopefully the Taliban will behave themselves over the next couple of weeks and I won’t have much to report… but let’s see!

1 thought on “Last Woman Standing, Jalalabad and a Lot Of Cold Water….”